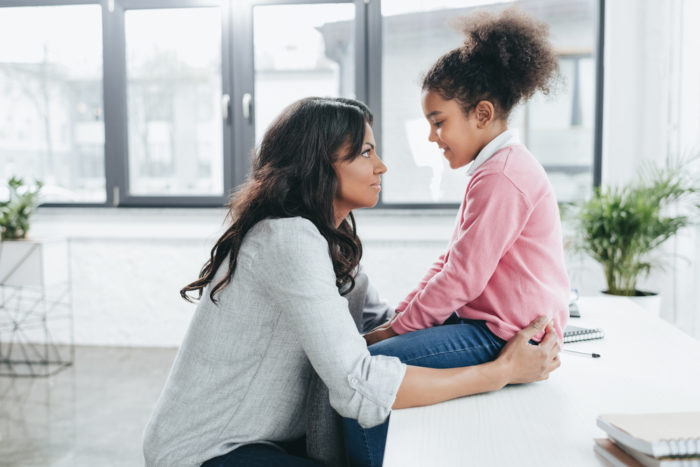 I remember taking my then-6-month-old to see his pediatrician.

He was sleeping peacefully in his car seat, so I placed his car seat right by my side as we waited for our turn to see the doctor in the lobby.

Not long after we entered the room, a woman came in with her daughter. The young blonde girl must have been about 3 years old, and she was so full of energy. After a few minutes of playing with toys, she noticed the car seat and came around to see the baby.

She looked at my son, slightly puzzled, smiled, and walked away. A few minutes later she came back again and peaked inside the car seat, paused as if deliberating what to do. I thought she wanted to play and was trying to process how to play with the sleeping child.

She got up, stood up straight, looked at her mother seating across the room, and asked: “Mom, why is his face black?”

It was a very sincere and innocent question and you can tell that this young, curious mind needed answers.

As I remember the incident, which happened several years ago, I think of the mind of a child as pure.

You can compare their minds to a clean, new canvas. The opinions they develop are based on what their parents and the people around them tell them. When it comes to the issue of racial relations, parents tell their children different things.

While you might think what you tell your child is your business, which is true, it’s a bit more complicated than it sounds. Whatever you tell your child within the walls of your home does not stay there. It moves beyond those walls into the playground, the classroom, the field, to music rooms, the lunchroom, and more.

What you tell your child influences, other children. That influence could either be positive or negative.

As people ask questions, eager to learn how to change the status quo when it comes to race relations, children should be in the picture. Having honest conversations on how we are educating the next generation is crucial.

While this is not an exhaustive list, the points below are worth paying attention to.

Tell Them the Truth

You might have your opinion about other races. These opinions may be based on how you were raised, or some life experiences. Rather than passing on the stories, it is important to reflect and be sure the information you are passing on is true.

I remember a friend sharing an experience with me. Her 5-year-old daughter had returned from school upset. She told her mom her best friend would no longer be her friend.

When asked why, her daughter told her that this friend said, “blacks are bad.” I remember my friend repeating this over and over again to me. “Do you think a 5-year-old came up with that?”

It is important to tell children the truth. African Americans, Caucasians, Asians, Native Americans, Latinos are not bad.

No race is bad.

If there is anything we can learn from the protest against police brutality we are witnessing today, it is that the future ahead has zero-tolerance for racism.

Train Them to Build Bridges

One afternoon, my then-kindergartner asked me why he is black. This particular day, I felt there was more to the question, so I probed.

After a few minutes, he opened up to me that his new friends said they would not allow him to join their playgroup because he is dark-skinned. This diverse group of friends had one Caucasian boy, one Asian, and one biracial boy. He explained that others in the group were light-skinned and he was too dark-skinned.

One thing that was very important to me at that point was his self-esteem. I spent time talking to him about how handsome he is. We discussed how cool his skin color is and that God spent time making him perfect! With every word I spoke to him, I saw him brighten up. Then I told him that the next day in school, he should tell his friends that he would like to play with them, but if they do not want to play with him, he is fine with it. He should let them know he will go ahead and create his own group of friends and he will have more fun with them.

By the end of our conversation, he was beaming. He did exactly as I told him. Not only did this group allow him to play with them that day — they remained best buds for several years later. As I thought about that incident, I realized the powerful influence parents have over their children. We can train them to build bridges or train them to burn bridges.

When it comes to race relations, it is important for parents to think about their words and actions. Playground issues are bound to come up, but the big question is: Are you training your child to build bridges with people of other races?

Educate Them About Other Races

We as parents need to educate ourselves about other cultures outside ours. Informed parents can educate kids and can respond appropriately when engaging with people of other cultures.

If you are looking for good books on building relationships across different races, here are some good ones: The Skin You Live In by David Ireland, Ph.D., The Soul of Black Folk by the late activist W.E.B Du Bois, and So You Want To Talk About Race by Ijeoma Oluo.

Educating children will help them develop an appreciation for people who look different than them. I recently learnt that young African American girls are often referred to as boys because of their hair. That was something I never experienced, but thinking about my childhood, I can only imagine how painful these experiences must be for these young girls. Some of them are told they are not princesses because their hair is not silky and flowing.

While this might sound very simple or trivial to a grown-up, it means a lot to 5-year-old girls, whose life ambitions at that age are to grow up to either become princesses or mermaids. Children should know that texture of their hair and color of their skin are things people are naturally blessed with. No one gets a chance to determine their race. Whether they are from a different race or from mixed races, every child needs to feel accepted. Parents have a huge role to play in improving playground dynamics in America.

Many years ago, I heard one student ask the other, “What are you?” The other student responded, “I am half-Asian, half-Persian.” The student went on to say, “I have been trying to figure you out since you walked in.”

I was taken aback by the question, “What are you?” Prior to that time, I had never heard anyone ask another “what” they are.

I grew up in a homogenous community, absolutely oblivious to some things children growing up in diverse communities have to deal with. The biracial student was obviously not hearing the question for the first time. The only thing we do not know is how these types of questions make him feel… down deep in his heart.

With so much going on in our world today, it is important for parents to help children appreciate and value people that look different from them. We have more in common that we all realize.

Let’s help the next generation appreciate what we have in common and focus on that rather than our differences.

Let them know that we are all valuable.

We all deserve to give and receive respect.

We all have a powerful voice and deserve to be heard.

We all belong to one race… the human race.

Julia Olayanju is a scientist, educator, and strategy consultant. She is passionate about seeing more women in leadership positions across sectors, on her own time she consults with high achievers to accelerate growth and accomplish their goals faster. She is the Executive Director, Global Food Health Institute where she leads a team that investigates and leverage technology to help people live healthier and stronger lives though nutrition. They employ technology to educate, engage and reward students for making healthier dining choices at yscooks.com. View all posts by Julia Olayanju